Bruce Springsteen and the Pound Signs 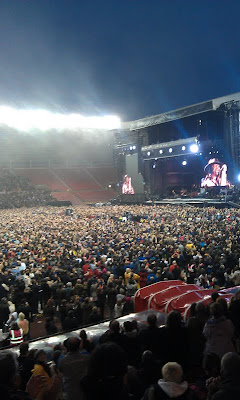 This weekend I experienced two of the best musical performances I’ve seen in a long, long time. I’m not a music critic, but I know what I like and what works, and I’ve been to a lot of gigs. The two acts I saw within 24 hours of each other were both amazing, their shows life-affirming experiences for the power, inspiration and ethereal soul-lifting effect music can have when done with verve. But here, the similarities end and something far less tangible arises: namely an ambiguity in how two apparently similar events can, if we strip away the music and lyrics, be so very different. I saw Bruce Springsteen at Sunderland’s Stadium of Light on Thursday evening. It cost £65. He played for about 3 and half hours. The following night I saw Ajimal play a headline slot at local acoustic night, The Polite Room, at the Tyneside Cinema for £5. He played for 45 minutes. I don’t want to start deconstructing their sets and putting the performances into a binary ratio of money paid to time on stage because besides being dull, that doesn’t really lead me to the angle from which I want to view these two events.

My uncertainty is borne out of a simple question: how far does (and should) money be a facilitator of the arts? I’m going to get this out of the bag at the outset, by the way: I am a fully paid up hypocrite; as, I believe, we all are, to a lesser or greater extent. Here’s the start of my beef: a pint of lager (Foster’s, brewed in Manchester, England, and near Edinburgh, I believe) cost £4 within the confines of the Stadium of Light. Now, I won’t use this as a vehicle for my real-ale predilections, but even the most casual of beer drinkers knows that Foster’s tastes like camel piss and fag ash. My gripe is not with the taste, but with the siphoning off of money by a multinational brand, into the abstract wallets of its financiers and investors in London and other major cities. For every £4 of the amber nectar poured, I’d be willing to bet that less than 10% of that money stayed in Sunderland. I’m not saying that that is exclusively a bad thing (but it pretty much is), however, would it hurt SAFC/the promoters’ reputation to flex the drinks contracts for events, not to mention matches, and allow even one small bar to sell locally-brewed, infinitely more tasty real ale, keeping more of the punters’ money within the local economy and helping what is a burgeoning, albeit still quite niche, part of North East industry and social life? Really, what would the damage be to Foster’s? The hypocrisy, as you’ve surely already guessed, is that I drank more than one pint of Foster’s. Does that invalidate my point? No, I don’t think it does. In fact, I’d go as far as to say it reinforces it. The joy of capitalism, if you’re the MD at Foster’s, is that music and beer are ideal bed partners. Everyone knows this, particularly those at the SoL who, presumably, when purchasing bulk orders of naff beer, were rewarded with a hearty discount and a safe promise that it’s a win-win all round because people will drink the stuff (almost) regardless of taste and price.

I am at once complicit in, shocked by, in awe of and confused by this leviathanic system. So much so that I needed to start a new paragraph highlighting the fact!

Those who are even vaguely familiar with the recent history and geography of Sunderland will know that the Stadium of Light occupies the former site of the Wearmouth Colliery, a place where men did what used to exemplify the spirit of the North East: dig shitloads of coal out of the ground despite the conditions and pay. Up here, everyone knows how this story ends: privatisation of industry; unemployment; end of an era. I’m not here to bash Thatcher for what happened on Wearside; for me to do so would be disingenuous – I wasn’t even alive when the wheels were set in motion. What I was fascinated by, standing on what had, only 20 or so years previously been a site of manual labour, was the huge irony created by the convergence of time, space and politics. Many of Bruce Springsteen’s songs are rooted in blue-collar narratives; tales of hard times and economic gloom; a making sense of the class system and its complexities and horrors. His new album, Wrecking Ball, continues in this vein and I credit Springsteen for that. Speaking out for and challenging a world that seems to have its shoes on the wrong feet is a commendable, brave and massively important thing for any artist to do and The Boss does it with tact. What I can’t quite be comfortable with is knowing how much money he must have received to sing us these songs when there must surely have been thousands of people in the audience who saved many months for the privilege. Don’t get me wrong, I know that a reputation cannot survive on kind words alone, and when all the other band members, roadies, technicians and multiple other people behind the scenes are taken into consideration, it’s not actually that expensive (and howay, he did play for a long time), it’s just interesting to note the discord between Bruce Springsteen the artist and Bruce Springsteen the millionaire.

The following night’s gig was an entirely different beast. Yes, a pint was only 5 pence cheaper, but it was, depending on whether you had the German lager or the Wylam ale, a far tastier/ more locally-brewed sensation. Ajimal is the name that singer/songwriter and all-round tremendously talented lad Francis O’Hanlon performs under, and the Tyneside Cinema is the region’s premiere independent cinema/bar/small venue. I’m not going to say much about his style or set as frankly the EP hasn’t even been released yet and this was one of those performances that words can bring little justice to. In short, it was amazing. On his last song, performing entirely without amplification, he walked throughout the crowd, strumming an acoustic guitar and letting his vocal range soar. Hairs on backs of necks were erect. A genuine talent shone. The 60 ish people in the room will doubtless remember the night for a long time, just as the 40,000 at Bruce Springsteen will remember his explosive night of grade A rock ’n’ roll for a long time.

So, cutting a long rant short and attempting to get some resolution on this, I put to you again the question I posed at the start: if money facilitates art, and let’s face it, it really does, how should we feel when we know it can be done equally well on a far lesser budget? I await your answers and philosophical/political takes on this because I’m sure I’m not the only one who finds it all quite strange.
Posted by A Broken Fence Between Past And Present Tense at 16:57