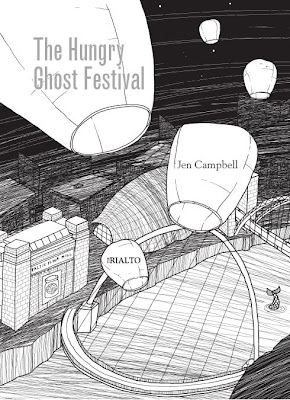 Jen Campbell (not related, honest) is the author of the fantastic Weird Things Customers Say in Bookshops, as well as being a short story writer and poet. To promote the launch of her debut poetry pamphlet, The Hungry Ghost Festival, which was published by The Rialto on Monday, Jen agreed to an e-interview for this here blog.

I’ll start by mentioning how this came about, because we’ve never actually met. I read one of Jen’s poems in a copy of The Rialto magazine last year in which she name-drops the 35 bus which runs between South Shields and Sunderland – a bus I took to Sixth Form nearly every day for two years. Checking the authors’ notes, I discovered Jen is originally from Tyneside(!) After a few email exchanges, it emerged we went to the same school. A writer, from Cleadon, who went to the same school as me, who writes fantastic poems and has some of them published by an equally fantastic outfit? Well, I just had to know more!

Jake: Hello, Jen! Firstly, thanks a lot for agreeing to do this (rather bizarre) interview. For those who don’t know you and your work, how about a quick introduction?

Jen: Thanks for having me! Well, as for an introduction, I'm a writer and a bookseller. Poetry is my first love. I grew up in the north east, went to Edinburgh University and now live in north London, where I work in an antiquarian bookshop. I also have unhealthy obsession with tea and Jaffa cakes.

Jake: Some of your poems deal with your childhood home and the surrounding areas in the North East, often focusing on memories of school and of your family. Has moving to other parts of the country, settled as you are now in London, affected the writing of these poems at all?

Jen: I think distance definitely affects writing. I very rarely, for instance, find myself writing about London. I don't know if that's because I live there and my poetry is linked in with nostalgia - I think that probably is the case. I do know that I miss the sea a lot, and I'm also interested in folklore surrounding the sea [especially mermaids and selkies], so when that appears in my poetry I normally link it up with memories of the north east.

Jake: If I’m not mistaken, Weird Things Customers Say in Bookshops, which originally featured as a part of your blog, became the book it is because of a re-tweet from Neil Gaiman and the fan base and literary contacts he has. How do you feel about writers and their relationships to the internet? I know that’s quite a dense subject to take on, but I wonder if – despite all its benefits – the internet can sometimes just detract us from the important business of putting pen to paper?

Jen: Weird Things... was never supposed to be a book [it was a very pleasant surprise when it became one!]. I started putting the quotes up on my blog, and the links to those posts were thrown around Twitter by other bookshops and publishing houses; it was mentioned in The Guardian, Buzzfeed and The Huffington Post. I'd just signed with my agent, Charlie, for my fiction work when Neil Gaiman then blogged about 'Weird Things...' which again opened it up to a much wider audience. One of the people who read his blog post on my blog post [*mind boggle*] was Hugh, who works at Constable and Robinson. He used to work at Ripping Yarns [my bookshop] ten years ago, and found 'Weird Things...' amusing. He got in touch to ask if I'd be interested in making it into a book. We never thought it would be as successful as it has been [sitting in The Sunday Times Bestseller List for five weeks], which has been another pleasant surprise!

So, I can't fault Twitter in the amount it's helped me connect with other writers and also how it's helped me [and other bookshops] in the organisation of talks and events. It makes the book world a whole lot more personable, which is fab.

However, there is that quote knocking around: 'Writing a book is 3% good writing and 97% not getting distracted by the internet.' There's definitely something to be said for that, too! Procrastination is a nasty bugger.

Jake: Your poems often seem to me like Russian Matryoshka dolls; showing us, initially, quite a grand scene, but really there are many smaller things going on below the surface. I wonder if you could tell me a little bit about the processes you go through in writing poems like ‘The Patron Saints of Animals’, which to me is a great example of writing that appears simplistic, but is deceptively complex and well crafted?

Jen: I'm not going do an Alice Walker and say that my poems [like her characters] talk to me. However, I do find myself building scenes for poems in my head a long time before I start to write them down. They're forming there, until I feel the need to really write them down. That doesn't happen with every poem, but it does with ones such as 'Patron Saints...', 'Memories of His Sister' etc which have a bit of a narrative. 'The Patron Saints...' is, in my head, set in a farmhouse that was out the back of my parents' garden. So, to me, it's about a farm, but also a dysfunctional family who don't communicate with each other. There are also elements of the supernatural and rituals weaved in and also references to Animal Farm [to reflect the strange nature of the family it depicts]. So, one initial image does grow like a Hydra when I'm writing it; I try to capture it as best as I can, and just hope that other people enjoy it.

Jake: Poetry pamphlets seems to be the ‘in thing’ at the moment, and not just for emerging writers – many established poets are using them to try and flesh out concise ideas or sequences, and the best examples often end up as beautiful pieces of art in their own right. Did you intend to produce a pamphlet sized collection of poems first, before thinking of a full collection, or was it quite an organic thing?

Jen: I hadn't always planned to, but I could tell when I was writing poems such as 'Angel,' 'Mountain Miners' and 'Cross-hatch' that I was collecting a lot of north-east themed poems. I could also tell that it wasn't going to be a full-length collection [I'm working on one of those at the moment which is about deformities and freak shows, tied in with myth], so a pamphlet seemed like a good thing to aim for, and rather appropriate for my first collection to be centred around my childhood. Pamphlets are a great way to get your work out there, and I've loved The Rialto for a long time so I was thrilled when they agreed to publish the collection.

Jake: Finally, what’s next for your writing career, Jen?

Jen: Well, I'm working on a full-length poetry collection, and a novel. There will probably be a sequel of 'Weird Things...' at some point - at the moment I'm getting ready for the release of that in the States. :)

The Hungry Ghost Festival is officially out now from The Rialto. Go and buy a copy!

To hear Jen reading one of the poems, have a look at her blog. 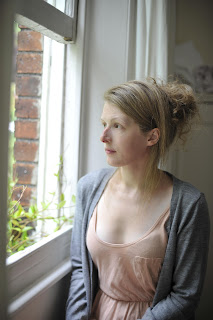 Posted by A Broken Fence Between Past And Present Tense at 04:58