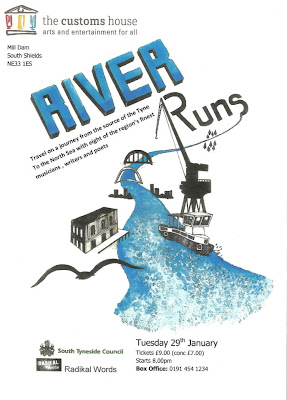 It’s hard not to be taken under the spell of the river Tyne. River Runs, a celebration of the ‘big river’ in song and spoken word, certainly makes you think so.

Performed in the main auditorium at The Customs House in South Shields, a venue which, I must admit, I had my doubts about (more because of its size than anything else), the 8 performers managed the impressive feat of playing to a largely empty auditorium and drawing the focus to the front of the room so that it felt like a cosy gig in the back room of The Steamboat.*

In narrative terms, River Runs is a song and verse line for the journey of the river Tyne. From its source in the hills and valleys of Northumberland and the Borders, to its confluence (the rivers North and South Tyne meet near Hexham) and subsequent journey through various towns til it spills out into the North Sea, this show is concerned with what the river gives and what the river leaves behind.

Personal narratives overlap with common histories; tragedy overlays euphoria. How this translates into a stage show is masterful in its simplicity. The 8 performers seem to conjure the river, picking at it for stories, for anecdotes, for truths about life. Kate Fox tells us about training for the Great North Run down at Newcastle Quayside; Jeff Price remembers fights in the Bigg Market; Degna Stone worries about a Samaritans sign on the High Level Bridge; Alfie Crow remembers the smells of Wallsend; Aidan Clarke recalls his youth in the North Tyne Valley.

It would be unfair and unnecessary to dwell too long on individual stories: the performances worked so well because of their chemistry – because of the democratisation of the stage. It would have been tempting to allow ‘names’ to dominate River Runs, so it was to the show’s credit that – despite each of the performers being well-respected within their own respective artistic circles – it resisted such easy billing.

Highlights for me (which now feels slightly arbitrary), include the story of Tommy the Swing Bridge busker, a wily singer who avoided arrest by moving between the police jurisdictions of Northumberland and Durham in the middle of the river, and Simma’s ‘Hexham Song’, where he “left for Hexham with one girl and came back with two”, a song jammed full of soul but not reductively sentimental for being so. Ben Holland and Bridie Jackson bookended the other performers, showing that basic stagecraft often works the best. Wielding acoustic guitars and ethereal vocals, their folky vignettes punctuated the other performers’ works, bringing a sense of collectivity to the more introspective numbers. As Jeff Price noted, introducing his ‘sins’ poem, rivers are well known for hearing our confessions and drowning them: the personal becomes part of the universal.

Running for just over an hour, including a short interval, River Runs is a welcome addition to the canon of mythology that surrounds the great river. There were no props, no sets, no gimmicks: this was simply 8 people connecting with each other and with their audience. I hope this show gets the wider audience it so very much deserves.

*The Steamboat, just over the road from The Customs House, is the best pub in South Shields [according to JC and CAMRA].
Posted by A Broken Fence Between Past And Present Tense at 14:50