On Collaboration and Tough Times 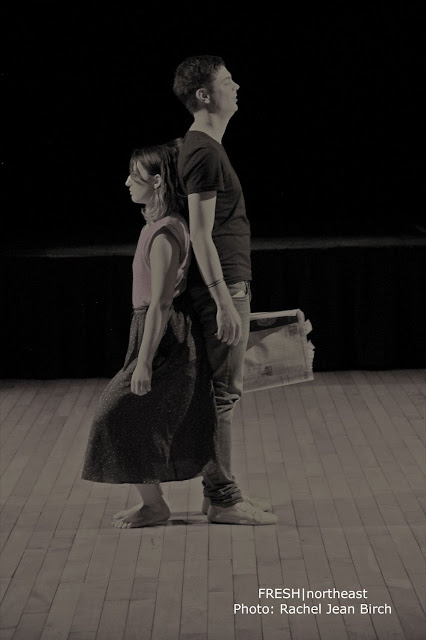 Luckily, feedback on our performance was largely positive, and discussions between the facilitators and other artists at the end of the performances was rich, detailed and positive. A common criticism, at least of my part of the performance, was whether or not I should have been ‘reading’ or ‘performing’ the poem. It’s a debate I find myself coming back to time and time again, even though, as Saul Williams reminds us in We Are Poets (very highly recommended, by the way) there is neither ‘performance’ nor ‘page’ poetry: there is just poetry, this ancient art form, stretching back as far as Homer, which, time and again, has been used to illuminate the world.

Shelving the academic and theoretical arguments here, a healthy debate was opened: can hearing a poem – irrespective of whether it is over the top of visuals/dance/etc. or not – without having read it, be ‘enough’?

As I have found myself still mired in a state of not feeling particularly energised by poetry and literature, it is one of many questions I have been asking myself. Recently, more experimental work has been the only type of literature to light my candle, if you will. I’ve flirted with, and had some success, publishing visual or macro poetry on a number of internet poetry blogs, including Bad Robot Poetry and my own, CAPTCHA. I’ve also cracked the tough outer shell of Bloodaxe’s new anthology, DearWorld and Everyone In It, finding some absolutely astonishing ‘experimental’, contemporary, ‘austere’ poetry. But, it somehow doesn’t seem enough to sate. Having swung chaotically between various states of calm, frustration and incredulity at my own, as well as the wider socio/political and economic, situation(s) during these past two years or so, poetry and literature has — well — it’s figured less and less. At precisely the time when I should be writing to speak out against this government, this... fucked up-ness of trying to sustain more and more stuff on a finite planet, I’ve done the complete opposite, largely. Perhaps this is symptomatic of some of the more subconscious effects of austerity – an eventual subservient acceptance of bleakness? – I’m not sure, but I know that the spark has gone, and at the minute, I’m not even sure I want to look for it.


I met with a writer friend last week (I’m keeping her name anonymous in case she doesn’t want to be associated with this level of negativity) and we both agreed that things, already, had gotten harder in the Arts world here in the North East. While funding cuts weren’t as severe as we originally feared (50% in the end, so that’s alright then! Not), it is without a doubt a difficult time to do this for a living. That last statement is, of course, very highly loaded, and taps into what culture secretary Maria Miller said today in regards to whether government should subsidise the arts: “When times are tough and money is tight, our focus must be on culture’s economic impact.” Doubtless, this will require another separate blog post, but I know – and I’m sure many of my artist friends will agree – that I will sleep less easily tonight knowing that if the government don’t think my words would translate into cash, they will effectively just turn the other cheek and find someone whose words do. Just consider that for a second: just consider what tripe might end up being written to chase the carrot-on-the-stick of government-backed Arts funding. This definitely needs another blog post.


Posted by A Broken Fence Between Past And Present Tense at 14:04