Northern Rising: A North-East Poetry Social and a Milestone Issue for Butcher's Dog Before We Take a Break 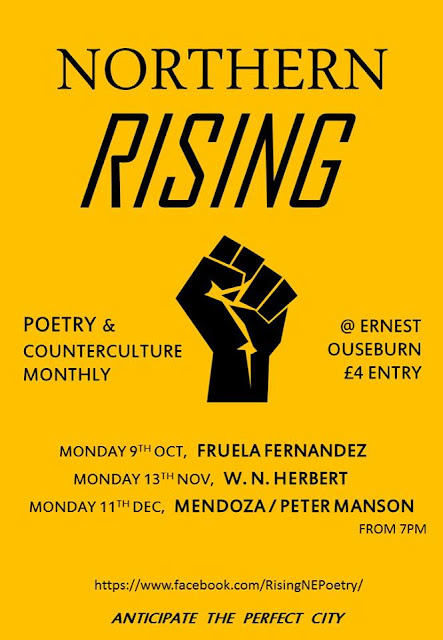 I read at the first Northern Rising event at Ernest in the Ouseburn on Monday night. Billed as a ‘North-East Poetry Social’, and inspired by the bohemian happenings on Tyneside in the sixties (most notably the Morden Tower poetry readings, which famously re-kindled Basil Bunting’s poetic career and saw literary heavyweights from America pass through Newcastle), Northern Rising was a primer for how poetry nights, tied to a wider political consciousness, might function in the city in 2017.

Organiser Alex Niven spoke at the start, saying how he hoped that the events would ‘draw a circle around a moment’, allowing exciting conversations to begin, networks to be made and voices – be they dissenting, entertaining or belonging to categories altogether unclassifiable – to be heard. Putting poets of various backgrounds together in this way, and introducing them without the inflated biographical details which so often function only to affirm a slew of prizes or publications, Northern Rising is a democratic space for live literature and lively discourse. Questioning who poetry is for and how it might coalesce with the emergent socio-political paradigm, the night felt like an important one post-Grenfell, post-Brexit, and post- well, you get the picture. As Fruela Fernandez, the ‘featured’ poet, said: Poetry is both there and not there. In its shape-shifting guise, perhaps it speaks best to these turbulent times.

Look out for the next instalment on 13th November as this is set to be a regular fixture on the regional circuit: one which, I’m sure, will gather momentum very quickly.

The second event I want to talk about is last night’s launch of the tenth issue of Butcher’s Dog. I have been involved with the magazine since the start: in 2012, when, along with six other poets, it was agreed that a new magazine was needed to harness the energy of poetry being written in the North-East. Since then, Butcher’s Dog has enjoyed phenomenal success, collaborating with the Poetry School and enjoying the benefit of a run of exciting guest editors, each of whom have put an original stamp on the magazine as it's gone along. Unfortunately, not long after securing Arts Council funding, most of the editors moved to different parts of the country, which has meant, increasingly, each issue has been a challenge to put together, not least for Degna Stone, indomitable Top Dog and managing editor.

With those logistical pressures in mind, and having reached a landmark issue, we have decided to put the Dog to bed for a year. Last night was both a celebration of the most recent issue, and a reflection on where we started out. It was really great to see new and old Dogs taking to the stage in Culture Lab, Newcastle, and to have the magazine so enthusiastically supported by the director of the Newcastle Centre for the Literary Arts, Sinéad Morrissey. The night was filled with poetic delights from contributors past and present: Roy Marshall had made a 400-mile round poetry road-trip from Leicester, bringing co-editor James Giddings and reader Suzzanah Evans with him; and Staurt Charlseworth had trained it up all the way from Norwich. Poets based in the region who’ve appeared in previous issues – Bernadette McAloon, W.N. Herbert, John Challis, Kris Johnson, Blaine Ward and Lisa Matthews – all read, and I was introduced to some phenomenal new voices: Lauren Garland, Rob Walton and Rowena Knight. For me, this is the ultimate joy of events like this: that they can stimulate community in a way that is genuinely uplifting and thought-provoking while resisting cliquiness.

Butcher’s Dog now enters a fallow year, but I reckon when it returns, it will be as – if not more – vital than five years ago when it was just a glint in a workshop group’s eye. For now, do get your hands on a copy of the latest issue, and, as Carolyn Jess-Cooke’s poem, ‘1 day old, 6.03 a.m.’, implores, ‘hold each other close’.
Posted by A Broken Fence Between Past And Present Tense at 07:47