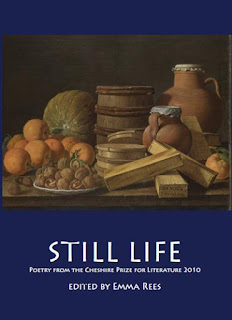 I was unable to make the launch event last week, which is a shame because the anthology contains some fabulous poets, many of whom I know very well. Still, my contributor's copy arrived yesterday, and a fine little book it is.

I remember entering the Cheshire Prize for Literature in 2007. Every year, the category of literature revolves between poetry, short stories and children's writing. Back in 2007, with the inflated ego that I expect can only arise from feeling enthused about having just started writing 'uber-contemporary poems': ones which don't rhyme; use swear words liberally; aren't about flowers and unrequited love; etcetera, etcetera, I entered the prize. Suffice to say, I didn't make the anthology.

Still, if my Granddad (coincidentally, the subject of the poem which did get in this year) was to be believed when I was typing the 2007 manuscript, it was the unrestrained use of the word 'fuck', and that alone which would invariably fail me. He was probably half right, and so it fills me with a sense of pride which I can only describe as being like a shot of Ouso: I know it's bad, but I have to swallow it anyway now it's here. That I got a poem into the anthology isn't solely because of its clean language, of course - I'd like to believe that since 2007, having seen a number of the writers who feature in the anthology year after year, read their poetry several times, and of course having completed my degree, my own writing has been charged; if the poetry community is a magnet, I feel like I've picked up some positive vibes (or verbs?) along the way just by being in the presence of 'established' writers. But now I'm mixing ouso and magnets into a metaphor which probably resembles something from my 2007 effort. Let's just say my writing has improved.

Mind, I shouldn't be the judge of that.
Posted by A Broken Fence Between Past And Present Tense at 09:48