Writing Round the Toon 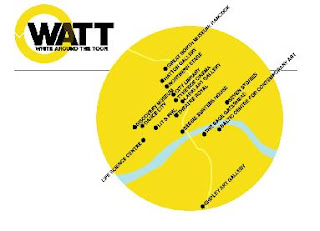 Last night I went to the Launch of Write Around The Toon, an ongoing, participatory event dubbed ‘a self-guided creative-writing tour of Newcastle-Gateshead, resulting from a series of short writing-residencies in cultural venues across the region.’

Bizarrely, the event slipped under my radar somewhat and I only decided to go at the last minute thanks to heavy promotion on Facebook. I’m glad I did. The premise, as surmised above, is a simple one, but its intentions, I hope, will be more far-reaching.

(Pretty much) everyone (in the North East) will be familiar with several of the venues ‒ from the Sage to the Baltic and the Life Science Centre and Hancock, these are venues that are now utterly synonymous with the cultural and architectural fabric of the region. This being the case, one might question why writing residencies in them were necessary. Well, I think what W.A.T.T has shown is that while we know these places exist, we don’t often spend a great deal of time in them; don’t bother questioning their history and indeed their worth within a culture of cutbacks and belt-tightening. Some of the lesser-known venues, such as Seven Stories and Bessie Surtee’s House, will have invariably been thrilled to have publicity. I’d be willing to bet that over half the people living in Tyne and Wear are not aware that we have an amazing, interactive centre for children’s literature (Seven Stories) just a mile out of Newcastle City Centre, for instance.

Not that publicity is what this event was solely about. Art is often contextual. Consider Alison Summers’s inventive story about a seamstress in the Theatre Royal who fell in love with a visiting actor. When we go to see a show at places like this, our experience is almost always transitory; the production or event has been packaged into a three hour drug, the effects of which temporarily remove us from our daily lives. Who hasn’t left a play or a film and spent the first few minutes back on the streets feeling slightly awkward, like reality hasn’t quite came back into focus?

This, I believe, is where the residencies and the work produced by them come to life. They bridge that gap between our conscious decision to pay money to be entertained by crafted artworks in what are themselves meticulously crafted and engineered spaces, in order that we might briefly consider our own place and power within a terribly confusing world, and our suspicion that the rest of the time, these places are just eating up public money. It’s a peep behind the curtain, a lifting of the bonnet on our cultural spaces so that we might spy inside and think, ‘ah, so it is a bit more complex.’

As a writer, it was interesting to read some of the participants’ blogs and subsequent pieces of creative writing. Kachi A Ozumba noted the difficulty of having to re-see the spaces in which one has become accustomed to, quoting Andrew Motion: ‘if you are going to write about what’s familiar to you, I think really you need to take your eyes out and give them a good wash and put them back in again before you start, so that you’re always seeing the familiar as a strange thing.’ Kachi, deliberating a starting point for his residency in the City Library, goes on to note that ‘the writing exercise had to be one that was sociable.’ There’s the buzz-word, sociable. What these residencies have shown is that writing, indeed Art, is at its most engaging when it requires people to talk, makes them notice these institutions which have been plonked on their doorstep by abstract forces from an Elitist Arts Order. People often tell me that The Sage is full of pompous bollocks. Yes, some of the art in there has certainly been controversial, difficult, strange, but for all of its presuppositions, it ‒ and venues like it ‒ are crucial in maintaining that dialogue, that conversation which says this is our city, let us always question it, challenge it, be tuned in to the minute frequencies of its development.
Posted by A Broken Fence Between Past And Present Tense at 06:14