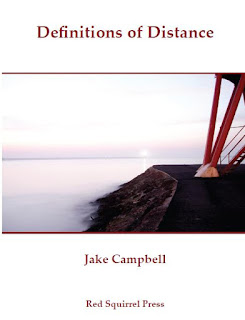 I launched my first pamphlet of poems, Definitions of Distance, at the third annual James Kirkup memorial poetry competition event in South Shields last Thursday. The evening featured several of this year's runners-up and the winner, Maggie Whyte, reading their poems from the anthology. Last year's winner, Martin Bennett, who'd flown over from Rome to be at the celebration, also launched his pamphlet, Unlike the Jungle Pheasant.

Having finally gotten hold of the physical thing, it's all a bit of a strange experience. I had started to become a bit blind to a lot of the poems in the pamphlet; I think this was best evidenced last Thursday by me being totally confused as to which order I should read them in, being used to holding a ream of pre-sorted sheets when I read my poems.

I'm doing launch events in several cities over the coming months, with the big North East one being at The Bridge Hotel in Newcastle on Tuesday 19th June. Please do get along if you can, or to any of the other events. Details on the 'readings' page above.

I'm now in a strange no-man's land between the pamphlet having been available for a few days and no reviews yet being received. Hopefully this will change in the coming weeks. If you do happen to feel like buying a copy (£4 from www.redsquirrelpress.com - what a bargain!), then please do let me know what you think.

Posted by A Broken Fence Between Past And Present Tense at 04:41