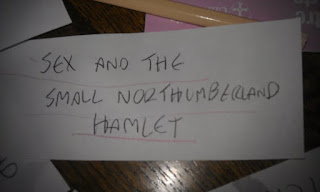 The final night of Trashed Organ’s Festival of Belonging Fringe proved true that old dictum: save the best for last. There’s an unwritten rule, isn’t there, in reviewing events in which one was also actively involved in, whereby you can’t praise your own work? Sod the formalities: mine and Helena’s One Day All of This Will be Fields fitted perfectly with the other fabulous collaborations and I’m hugely proud of our work!

The night started with Degna Stone’s collaboration with Ged Robinson and Adam James Cooper. Ingeniously combining percussion, violin, clarinet and poetry, their performance proved that when done well, music can really bring an extra edge to poems. They set the benchmark high, flitting organically between a spooky sense of longing and an optimistic verve for the very sense of what it means to be alive in this strange, strange world. I’d love to hear this recorded on to a mini album of sorts; the combination of the surreal music and Degna’s striking poems would, I’m sure, be well received.

Viccy Adams and Scott Hartley served up a delicious blend of video, fiddle and fiction. Adams’s narrative was something I’m sure we can all relate to in some way or another – trying to find oneself in a new town – and Hartley’s delicate tones punctuated the story brilliantly. The whole package was wrapped up with an amazingly simple backing video, layering gorgeous images of the sea, drizzly streets and itching hands into a visual reflection of the narrative.

Alex Lockwood and Tim Jago Morris took a more interactive approach, allowing audience participation, via a series of  amusing, randomly-distributed words and phrases (see photo above) to shape the progress of the flash fictions that were read. This added an intriguing level to the already difficult task ahead of Tim, who was to paint an impression of the six micro tales as they unfolded. An original take on the construction of narrative and the process of painting – both art forms normally taking many months or years to master – this collaboration not only provided us with punchy stories and moments of accidental comic genius, it questioned the very essence of how art should be made.

I won’t give details of our piece, save to say that I thought Hannah Costanzo brought the whole thing to life and deserves just as much credit as Helena and myself. Her voice is genuinely spine-tingling; her otherworldly presence as the fate-shaper, representing the Greek ‘Moirai’, was absolutely stunning and complemented our video no end.

Credit must also be given to Samantha Bell and James Barton, who premiered the first of two suitcase monologues. Bell’s Geordie accent lent an earnestness to her character’s confusion and Barton’s blend of magician and fortune-teller was a miniature masterpiece in its own right.

I left early, missing the majority of Fiona’s Jazz Express, but they surely deserve a belated round of applause for punctuating this and many of these events with their smooth melodies. The last thing to do, of course, is to thank John and Melanie for organising the events. The last 4 days have been great, cheers!

Posted by A Broken Fence Between Past And Present Tense at 06:46